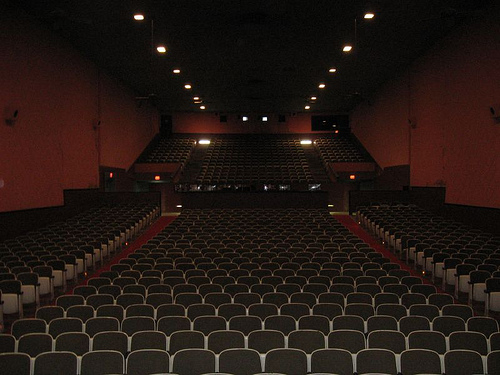 I am barely comfortable with blogging, but it feels good to write again.  I shared my site with a few friends and got some nice and immediate responses, so thank you!  I also decided to check in with my HR department to make sure my rants and resolutions would not cause conflict with them.  It all checked out, and I’m keeping this public.

My previous entry about grad school fell short on several important lessons learned.  For one- public speaking.  I never took a class in it, nor debated in high school, so the idea of getting up in front of a crowd to blab about a topic for a certain period of time was a bit nerve wrecking- as many people agree.  Presentations in class were hit and miss- I decided that if I liked the topic and became confident in it then I had a fighting chance.  If I was barely prepared or knew too little about it, then I was screwed.  I know that my cheeks get red no matter how anxious I am, so there is a bit of self-awareness that clouds my time in the hot seat.  It’s kind of a funny family trait, but still annoying.

One of my first presentations on green roofing was for a Master Gardeners group- the “hugs and cookies” crowd.   Nice, that was a safe audience.  I was merely introducing the concept back in 2001 so most examples were from Europe, and the benefits I went over were barely researched in the US.  Lucky for me, there were some signature projects that had been built in the US, so that brought some familiarity to the topic.  I presented the research I had started, and what my colleagues were studying.  I got great reviews from those in the audience.  It was an energizing topic that kept me energized on stage.

Public speaking is more than just getting a live audience to throw some slides to.  I’ve been on TV and radio, too.  I surprised my Grandma one day when she was listening to her talk radio one afternoon, and there I was talking with Don Shelby about green roofs in Minneapolis.  Ha!  Boy, that was a weird experience.  Don is a celebrity in the Twin Cities, having anchored the TV news for decades.  At the time they asked me for an interview, I didn’t know that.  I walked into the radio booth, which was painted dark red.  He hung signed photos from celebrities he palled around with over the decades.  The interview was actually decent- he spoke most of the time- and took a lot of commercial breaks.  I got to wear the big earphones and speak into the radio mic.  We faced each other during the Q&A, which was awkward.

Of course, there are media and audience you can’t always control- the journals and magazines who request an interview.  Yikes, what are they going to print?!  And, what are the public opinions going to be like?  In hindsight, I really which I had to take public speaking, instead I had to wing it.  Fake it till ya make it.

Over the last decade, I discovered audiences need a deeper understanding of the topic and have had to deal with naysayers.  We are not introducing the concept any more, we are pushing the industry in a much deeper direction in project performance.  I think if a box of Sedum on a roof is all someone is selling in a presentation, the owner is probably getting ripped off.
If I’m bored talking about something, then certainly the audience is.  I want the presentation to be a little memorable and current.  Got to keep it light, and with an interesting twist.  And, the other key thing is, however vain, is to take off that name tag (especially those horrid lanyard ones).  Presentation photos are bad to begin with, and the name tag will just glare a white square right back.  Haha
Posted by Green Pioneer at 6:04 PM No comments:


My introduction to the green roof industry was really quiet simple and easy.  I wanted to go to grad school and further study how plants can interact within the human environment in a sustainable way for both.  I had been working in the biotech industry in North Carolina where I was growing Arabidopsis and Mentha in a controlled environment and we were running genetic experiments that really meant little to the big wigs.  Of course, our group didn’t know this until later, frustrating me to no end.  It made me realize that where I wanted to be in my career, I was going to have to get a Masters in Science to gain credibility to make decisions...  Which is how I ended up at Michigan State.  (10 years later, they still have the strongest green roof research program in the country, and even a few undergrads have found jobs in the  industry.)

I was motivated! I loved living in Michigan and MSU was a great place to study horticulture and plant science.  I biked to campus, was running daily, and trained for a marathon.  My grad student group went skiing in the winter, and camping in the summer.  The hort programs were fun, and I was a member of the CSA (Community Supported Ag).

My advisor Dr. Brad Rowe (a.k.a The guy who has a green roof dog house for his 2 brown dogs) gave me direction for my research, but it was up to me to collect data and process it in a timely manner and work independently. 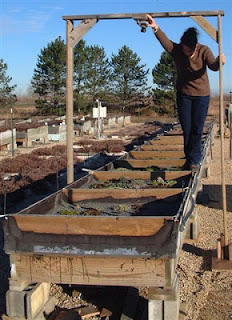 I started some cool experiments where the results are now used in practice by growers and other industry professionals- little did they know the information came from our collection of research.  I published three studies that are now referenced as “original” studies… Man, do I feel old!
Posted by Green Pioneer at 2:13 PM No comments:


This is the launch.  A Re-launch.  In fact, it’s my Green Re-launch that I need.  This week I met with an old co-worker who put a fire under my ass.  She’s good like that.  We talked about my lackluster attitude in an industry that should never be described as such.  The negative attitude that I created, which manifested in my gut intermittently over the years, needed to leave.  And the fire under my ass was its perfect escape.

I work exclusively in the green roof industry.  I was one of the first “young professionals” to get a Master’s degree in an emerging technology, and probably the first woman to make a career of it.   I am not a born sales person who was looking for something awesome to sell; nor was I groomed as a construction manager or scientist who had a project focused on green roofs.  At times, I’ve been charged with being too passionate and dedicated, is that a negative comment?  Though some may describe me as a pioneer, I touch all aspects of green roofing every day, which I just consider my job.

I decided to commit to writing about this topic today, October 19, 2012 (in these days it’ll probably be distributed in blog form, but I’m ok with that).  I am committing to this so that if nothing else, someone will read these old chapters and we’ll give it a good laugh.  Although egoistically I hope that someone else can learn from me, or at least appreciate what happened to me while blazing the trail in the green industry.

I took creating writing in undergrad just because I wanted to.  I thought I did well in the class and had fun.  I continued to write and published a few works in the college quarterly magazine- I don’t remember the topics, but it was probably about a burning candle or something un-original.  However, I settled on a minor in technical writing and wrote my Master’s thesis, which I found out I loved and understood much more than creative writing at the time.  Now, I have no rules except the ones I give myself.  I am excited to share my writing now even though I’m breaking my first new rule: Define The Audience.  I’m excited to see where this may take me, how often I post, what the feedback will sound like, and how my writing style will change over time…And how I change because of the writing.

For now, I’ll lay out the chapters of the past, answering standard question of “How did you ever get involved in that?!”  Ten years into this green roof journey, I picked up some amazing stories and hilarious adventures.  And, of course my contact list of people!  Some will be easily exaggerated- sorry in advance for that, but I’ve got to make this entertaining.   I spend a lot of time on the road with thoughts and ideas on my life.   A few particulars have spilled into my personal life that I plan to share as well.  And as I admit that, I decided to warm up to my readership and include my deepest Jack Handy thoughts, fears, and successes that I need to include in these chapters, too.